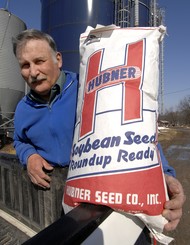 Photo by Skip Lawrence
Gareth Harshman displays a bag of Roundup Ready soybean seeds at his farm near New Market.

FREDERICK — Though controversial, genetic engineering — a technology used to insert genes from different species into agricultural plants and animals by directly manipulating DNA in a laboratory — is considered the most important change in agriculture in the last decade.

“I guess the biggest impact has been with seeds that have been genetically altered so they can be sprayed with pesticide without harming the plants,” said Harshman, a soybean grower himself.

The use of biotechnology in agriculture has exploded during the past decade and will likely continue to do so in the foreseeable future, said Chris Feise, director, Washington State University Center for Sustaining Agriculture and Natural Resources.

However, Feise said biotech’s entry into farm fields and kitchens has not been without significant controversy, including concerns about bio-safety, human health impacts, loss of pest management tools, impacts on smaller farms, and more.

Breakthroughs in gene research have allowed agricultural companies to alter the DNA makeup of a wide variety of common plants, according to Pro & Con Publishers, a division of Congressional Digest Corp., which publishes impartial views on controversial issues.

A field sowed with genetically modified seeds will produce a larger harvest, increasing profits for the producer and eventually reducing costs for consumers. Despite these potential benefits, some have raised objections to the spread of genetically modified crops, arguing that their use could have unintended and potentially dangerous side effects.

Harshman said farmers were skeptical initially to use GE products but have come to accept it.

“We’ve found it to be a good management tool. It’s been proven safe scientifically,” Harshman said. He said the majority of soybeans in the Frederick area are “ready-round-up,” meaning, after the beans germinate, farmers spray a herbicide — “Round-up” — which kills the weeds without harming the bean. Once sprayed, Round-up kills plants and breaks down in a short time.

Roundup is the brand name of a systemic, broad-spectrum herbicide produced by the U.S. life sciences company Monsanto. It is the most used herbicide in the world, and the top-selling agrichemical of all time. The active ingredient of Roundup is the isopropylamine salt of glyphosate. Monsanto also produces seeds which grow into plants genetically engineered to be tolerant to glyphosate which are known as Roundup Ready crops. Such crops allow farmers to use glyphosate as a post-emergence pesticide against both broadleaf and cereal weeds. Soy was the first Roundup Ready crop and was produced at Monsanto’s Agracetus Campus located in Middleton, Wisconsin. Current Roundup Ready crops include maize (corn), sorghum, cotton, soy, canola and alfalfa.

Harshman said USDA-approved hormones are also used to beef up cattle, making them ready for market sooner. But he said there is concern that the hormones used to fatten cattle faster would also affect humans if it entered the food chain.

“Farmers are going on the trust that the government has done its job correctly,” Harshman said. Farmers also have the ability to inject hormones into dairy cattle to produce more milk per day. But not all farmers use it, Harshman said.

“Some farmers don’t believe in that and that’s fine and dandy,” Harshman said. “Others see it as an economic tool. I think these things will be looked at and appraised by individual farmers. Just because it works for me doesn’t mean it would work you. It’s a matter of choice,” Harshman said.

Kathy F. Falkenstein, Ph.D., is associate professor and chairwoman of the Hood College biology department. She teaches a class on biotechnology and agriculture and another class on the secret lives of plants.

Falkenstein, who supports GE, said she is having difficulty finding non-transgenic soybeans for class experiments because most of the farmers are planting transgenic beans, which, she said farmers have found to be superior.

“It’s about economics and supply and demand,” Falkenstein said. “I know people have health concerns but it’s a technique that allows for very precise genetic manipulation — much more than plant breeding which is not nearly as controlled. So I do support the technique. I think it holds potential for increasing yields. It’s very exciting.”

Genetically modified organism technology is not without its critics.

In their book, “GMO Free: Exposing the Hazards of Biotechnology to Ensure the Integrity of our Food Supply,” authors Mae-Wan Ho, Ph.D. and Lim Li Ching state that more than 600 scientists from 72 countries have called for a moratorium on the environmental release of genetically modified organisms.

“It has become increasingly evident that GM technology is inherently hazardous and unreliable both in agriculture and in medicine,” said Ching, whose career spans more than 30 years in research and teaching in biochemistry, evolution, molecular genetics and biophysics. Ching has also authored more than 200 publications, including 10 books.

Marc Lappe is director, The Center for Ethics and Toxics and author of “Against the Grain: Biotechnology and the Corporate Takeover of Your Food.”

He said the two authors “point to the cascade of risks stemming from uncontrolled pollination and other outside-the-species movement of introduced genes, including permanent loss of genetic integrity, evolutionary disruption and contamination of the natural lineage of species that have evolved over millennia with their own genetic mechanisms.”

But Falkenstein said there is no evidence that shows any health risk. “The biggest risk is a gene being transferred to a wild relative, which would make wild relative resistant to round-up,” she said.

Falkenstein said people should think about how advantageous the technology is to the farmer.

“I think people are very removed from their food source. They don’t have a realistic sense of what it takes to get food to the grocery stores,” Falkenstein said. “We have a very sophisticated food system.”

Mothers for Natural Law was founded in June 1996 to transform the problems facing families into simple, practical action steps every mother can take to safeguard the health, well-being and innocence of children.

“There is no consensus among scientists on the safety or on the risks associated with genetic engineering in agriculture. The international community is deeply divided on the issue. The claim to safety is a marketing slogan. It has no scientific basis,” according to Mothers for Natural Law.

In a related development, Dean Foods Co. of Dallas, the nation’s biggest milk company, has decided not to use milk from cloned animals even though federal scientists say there is virtually no difference between clones and conventional cows, pigs or goats. The company said recently that its customers and consumers don’t want milk from cloned animals.

The Food and Drug Administration in December gave preliminary approval to meat and milk from cloned animals and could grant final approval by year’s end.

A September poll by the Pew Initiative on Food and Biotechnology found that 64 percent of respondents were uncomfortable with animal cloning. A December poll by the University of Maryland found that the same percentage would buy, or consider buying, such food if the government said it was safe.

Biotechnology is here to stay, in Maryland, at least. Gov. Martin O’Malley is sponsoring legislation to form a Life Sciences Advisory Board to develop a strategic plan for Bioscience in the state and promote the industry.

Feise said the future course of agricultural biotechnology will be influenced by the scope and intensity of public discussion and debate on the topic.

Farmers Cooperative is a Hubner Seed Dealer. See our page on Crop Seeds for more information.